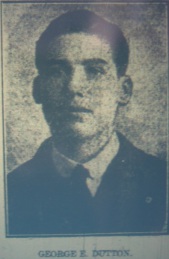 Much sympathy is extended to Mr and Mrs Dutton, of 2 Peartree Grove whose third son George Edward was lost at sea, on September 9th last, through the torpedoing of the vessel on which he was serving. Hopes were fondly entertained that he might have been picked up by some passing vessel, but unfortunately, they have not been realised and death has been presumed. Deceased was only 16 1/2 years old. He used to be a regular attendee at Wesley Hall, when at home.

9th September 1918, SS Missanabie, defensively-armed, built 1914, 12,469 grt, torpedoed and sunk by German U-boat UB 87, 52 miles SxE½E from Daunts Rock, Ireland. In ballast, Liverpool to New York. Owned by Canadian Pacific Ocean Services Ltd - Montreal and managed by Canadian Pacific Railway Ocean Lines. 45 lives lost, relates to crew members and/or civilian passengers only, not troops.
Military personnel were aboard.  I have been unable to discover much more about the sinking apart from the fact that the US destroyer McCall assisted the survivors and that some of her crew were awarded the Silver Cross.

MISSANABIE sailed in convoy O.L. 36. Records indicate 45 dead in the sinking, but no number of survivors are mentioned.