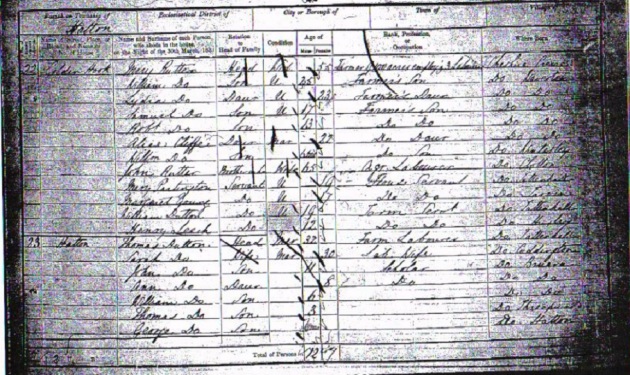 To add to the confusion we had two different Thomas Dutton's both born in Tattenhall, both with son's called John. I have elected to go with the above Thomas Dutton b1819 whose son was 11 years old in 1851 and would be 20 years old when he married in 1859. The other John was slightly younger, but because they were illiterate and numerous dates have proved to be inaccurate it was at the time a feasible assumption. 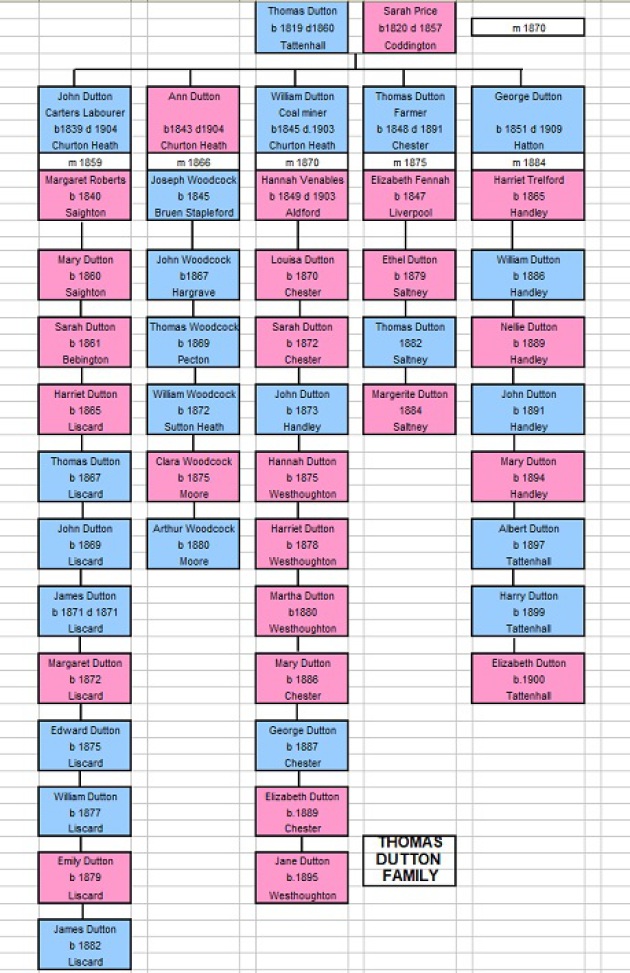 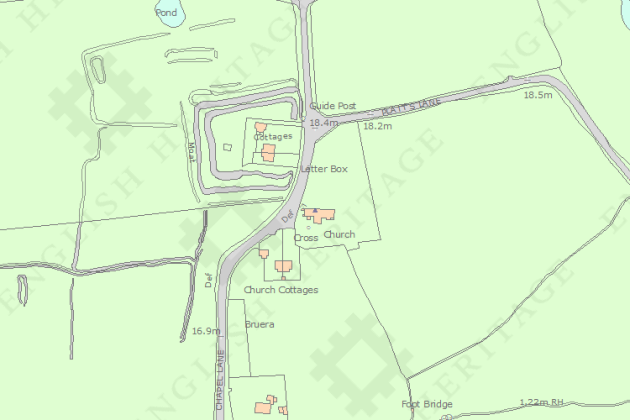 From the 1851 census, Bruera Chapelry four families were living within its boundaries:

I am of the opinion that the first three families lived in the church cottages, which can still be seen next to the church today.

The origins of the settlement known as Bruera are complex. The settlement lies at the junction of three townships - Buerton, Saighton and Churton Heath. All of these villages have connections to the Dutton family. Early nineteenth century maps show a cluster of buildings, located at the junction of Boat Lane and Chapel Lane, to which the name Buerton is applied (CHER 1951/3/3 & 1951/3/4).

Church of St Mary the Virgin, Chapel Lane, Bruera. Formerly called 'Capella in Bruera', the church was in existence in Saxon times and traces of 10th century masonry can be seen near the doorway. The present building has a late 11th or early 12th century chancel arch and masonry in the nave and chancel; 14th and 15th century windows and a late 15th century south chapel. It underwent a general restoration in 1896. The churchyard has been significantly expanded from the sub-oval shape shown on the Ordnance Survey 1st edition 25" maps. The northern and eastern part of the churchyard was occupied by a number of buildings and an orchard. The buildings are not shown on later maps, indicating their demolition (CHER 1951/3/2)..﻿﻿

Historic Ordnance Survey maps (1st, 2nd & 3rd edition 25") indicate that this area was occupied by a number of buildings. The buildings are clearly visible on aerial photographs dating from the 1940's. Part of a cluster of buildings to which the settlement name Buerton was applied in the ninetenth century. In 1838 this comprised a single large farm, then tenanted by Thomas Weaver, who ran the whole 265 hectares of Buerton township from it. There was also a pair of cottages (CHER 1951/3/3). A property called 'The Bugalow', located within this area, was demolished as recently as the 1960's, leaving amorphous earthworks.﻿