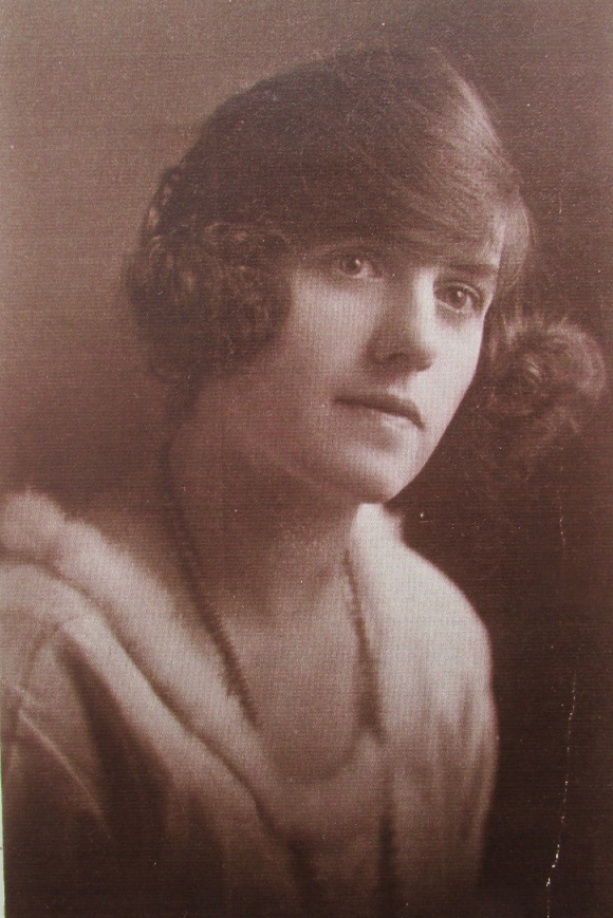 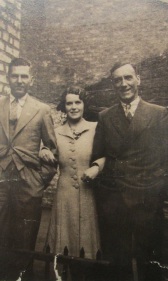 Edith was born in the winter of 1904, in Llanidloes mid Wales. I remember Ronald telling me he took his parents on a nostalgic journey and Edith recognised the street that she had lived in as a child. In 1929 Edith married Roderick J Dean. Ronald was born in 1930 their only child. They lived for many years in the Fireman’s Cottages in Manor Road. Roderick worked on the buses. When ever my Mom and I went shopping in Liscard we would call in to see Aunty Edith. A warm welcome and a cup of tea and biscuits were always forthcoming. I have correspondence from Ronald Edith’s son telling me of the visit to try and find his grandmothers grave in Rhayder.

The photograph taken on the 20th September 1943. 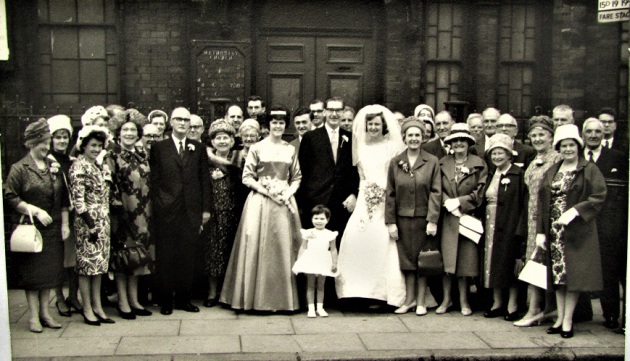 Standing next to the bride is Edith, Mamie Dean, Josie Dean then Teds wife Gladys and my Mother.

From the Wallasey News dated January 14th 1956 Wearing a gown of nylon lace over satin with trailing veil and carrying a bouquet of pink carnations, lily of the valley and white heather miss Norma Mary Parsons was married on Saturday at St Luke’s church to Mr. Ronald James Dean. The Rev. A.E.Lockley officiated. The bride is the daughter of Mr and Mrs J.W. Parsons of Dinmore Road, the bridegroom being the son of Mr and Mrs D.Dean of Manor Road. Given away by her father, the bride was attended by Miss Margaret Tebbet and Miss Carol Dodds. The first two were in turquoise gowns with flowered headdresses and carried daffodils. Miss Dodds wore a similar gown and carried a muff with a spray of a spray of anemones. Mr Stanley Pickles was the best man and the steward was Mr Bill Owens. After a reception at the home of the bride, the couple left for their honeymoon, the bride in a kingfisher blue coat with tan accessories. J.Pritchard, Wallasey Road supplied the cars. A keen mountaineer he first met Mavis through their join interest in rock climbing. Unfortunately the marriage was not to last and they divorced several years later. They got married quite late on in life and both were set in their ways. Aunt Edie was devastated by the news they had always appeared to be a loving couple. Ronald worked for many years in the Midland Bank eventually being promoted to the manager of the Wallasey Village branch. He moved to Church Stretton were he took up a post with the National Trust. My last communication with Ronald was in April 2010, I have since tried to make contact without any success.