William Simpson was born in the slums of Glasgow on the 28th October 1832. Despite receiving very little formal education, his early talents as an artist shone through and in later life he was to find recognition as a famous war correspondent and water colourist.

Simpson arrived off the Crimean peninsular on 15 November. He made numerous acquantances who helped him with details for his pictures, but he was also struck by the plight of the common soldiers, "miserable looking beings...covered with mud, dirt, and rags," he wrote. Later he worked for the Illustrated London News and continued working with the firm until his death.

To oder a copy of the book just click on the book cover. 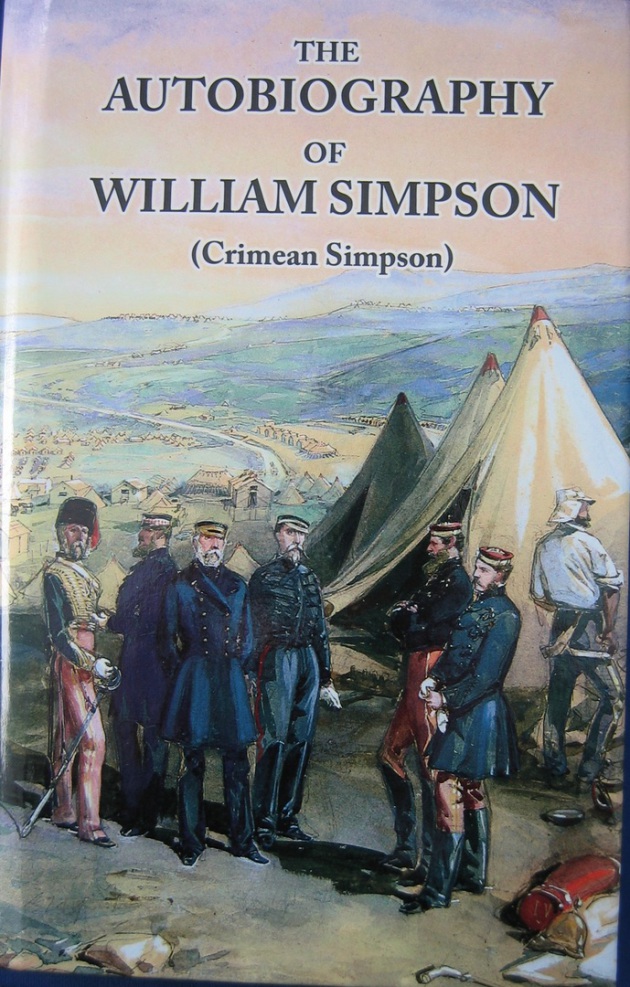 William Simpson was born on 28 October 1823 in Anderston, Glasgow.  He served his apprenticeship as a lithographer before moving to London.  In his early working life, Simpson had sketched and painted many scenes of old Glasgow, including the High Street and part of the Old College before the University’s move to its current home at Gilmorehill.  In 1854 he went to the Crimea to record the events of the war.  His subsequent work titled ‘The Seat of the War in the East’, increased his fame and earned him the sobriquet ‘Crimea’ or ‘Crimean’.  His work included the ‘Charge of the light Brigade’, an event Simpson recreated by interviewing survivors of this military debacle.

Simpson’s work together with other early War Correspondents such as William H Russell of The Times, Roger Fenton, photographer, and tales of Florence Nightingale brought home to the public, the horrors and mismanagement of the conflict. Although closely associated with the Crimea, Simpson also travelled the world and recorded other notable Victorian era events including the opening of the Suez Canal (1869), Forth Bridge (1890), and Coronation of Czar Alexander III (1881).  He visited Heinrich Schliemann’s excavations (1877) and entered the lively debate about whether this was the site of Homer’s Iliad, the Troy of Hector, Achilles and Agamemnon.

William ‘Crimea’ Simpson died 17 April 1899 and is buried in Highgate Cemetery, London.  His work can be found, amongst other places, at The Hunterian and in Glasgow Museums. This musket and the life of William Simpson was the subject of an undergraduate student research project by Tommy Shepherd who corresponded with William Simpson’s great grandson, Mr Adrian Lipscomb.