A Tale of Two Cities

A tale of two cities is the true story of our tenure of the City Pub, its history and the characters that crossed its doorway. Followed by a dip into the smorgasbord of Manchester's glorious past, from the clubs and pubs that have faded into history. To the buildings and places lost in the passage of time. 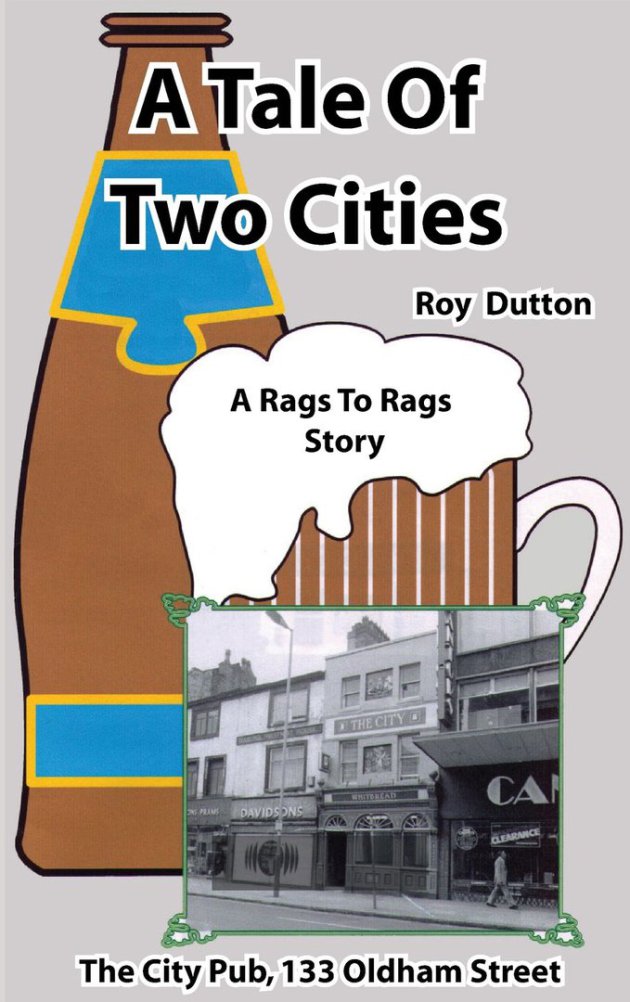 Excerpt from "A Tale of two Cities"

It tells the story of the City Pub in Oldham Street and the old Manchester long disappeared.

As I walked into the pub I met Eve the cleaner, she grinned sheepishly, her face breaking into a thousand wrinkles

Sometimes she would stay behind after she had done the cleaning. She was accompanied by her daughter Eve mark two, both of whom had made a career of cleaning up other peoples mess, both were very fond of the amber nectar, and both had similar hairstyles, but were separated by about 20 years. I arranged to buy them a drink but did not want to get involved in the conversation , which normally submerged into.

“You want to see the bloody mess in the gents toilets”, or we’ve run out of bleach”!  Eve normally wore a headscarf to cover her plastic curlers and bemoaning the vagaries of Modern Life:

“Young people today they don’t know they’re born‚ what with the telly and everything.  It’s not proper‚ like what we used to have‚ is it?

What do all these young kids want to get motor cars for?  We done without motors and it never done us no harm, walked everywhere!”

Between moaning and complaining, that was Eve the cleaner, and it got worse on a sliding scale, dependant on the alcohol intake. She was here to join in the festive activities when Billy Mac and his string ensemble arrived at two for the afternoon's tea dance. Billy Mac a blind organist, similar to Ray Charles, but he could not sing, and was a lighter colour and did not sway from side to side. Anyway he was accompanied by Anthony stage name Mr Starlight a 6ft 6” Jamaican who sang and kind of played the guitar. He wore a bus driver’s uniform and a cowboy hat. I remember that he had a really great, powerful voice but unfortunately, he sang out of tune and had no sense of rhythm and he used to make up his own words.

The duo was well known on the street. And had a small following of elderly groupies the blue rinse brigade.  So for £25 a session we had an exclusive contract for Wednesdays and Friday afternoons. Someone must have programmed the organ, because very little effort was required to produce a full orchestral sound.

Anyway the entertainment in inverted commas went down a treat, with the older clientele. They had to turn down the music on the odd occasion to facilitate the racing fraternity who viewed the race meeting on the TV  in the corner.