Started in 1953 by Norman Trafford and his wife, Dorothy Carr (later known as Aunty Dorothy and Uncle Norman), One of the main features of the show was the talent contest. Joytime ran for 45 years, becoming the longest running childrens show of it’s kind. During the summer session hoardes of kids would rush the stage every day for their five minutes of fame. The winner of each day’s contest went on to the final on Friday, with the winner going on the the Grand Final at New Brighton’s Floral Pavillion at the end of the summer.

Uncle Norman had the patience of a saint he always sat sideways at the piano trying to hear some little boy or girl sing, desperately trying to find the right key.
Auntie Dot was always immaculately dressed with a pink petticoat dress she was a lovely lady and they both hold a special place in my heart.

Joytime started off many stars, including Keith Chegwin, Janice Long and Sonia as well as thousands of children who just had a fun time.

J is for Joytime all happy and gay O is for our friends we meet everyday Y is for you and its your show you know T is for trafford the boss of the show I is for interval ice cream and tea M is for music we must have melody E is for everyone to have a goodtime and thats how you spell JOYTIME.

Aunty Dorothy continued with the show until ill health forced her to stop in 1997, she was awarded the British Empire Medal in 1992. She passed away in 1998. The show continues to this day as “Summer Sensations”, still on Vale Park’s bandstand.

The Tree Walk is 15 feet high and visitors enjoy the novelty of walking through the trees with hundreds of fascinating illuminated models of animals, birds, etc. peeping through the branches. The birds will be singing, animals chattering, human models talking.
walking around the paths at ground level visitors enjoy another magnificent illuminated display including 3-Dimensional set pieces such as "Aladdin's Cave, "Darkest Africa" "The Bookie, Honest Joe", the power driven "Teddy Bears Roundabout," "Giant Rocking Horse etc., surrounded by countless models all of ultra-modern 3-D design, transforming the whole are into a veritable Wonderland, and all before Disneyland in California had opened.

The "illuminated Tree Walk" which was introduced in 1954 and which, attracted over 170,000 visitors, raising £65,000 in its time, a real record.
When I was seven years old my mom took me to visit the walk. With illuminated animals and sound effects, it was a real magical experience that I will never forget.
﻿ 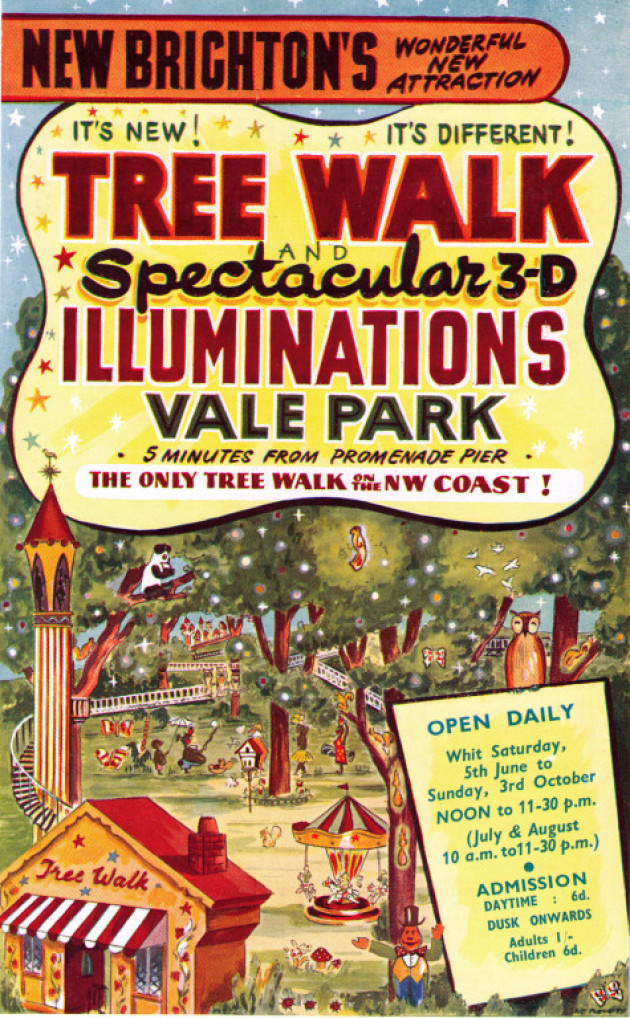